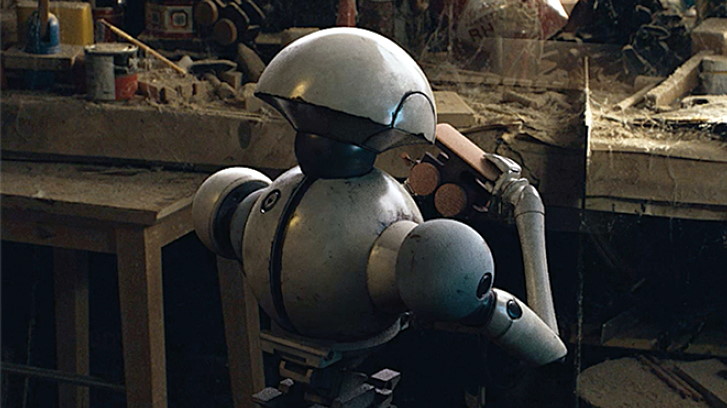 Synopsis: An elderly man lives as a recluse, haunted by his past and memory of the family he once had, until a non-human visitor arrives and disrupts his isolation.

Where did the idea for This Time Away come from? What inspired the story?

This Time Away comes from a personal place. I don't have the greatest relationship with my father and I've moved away from the family home relatively early. He has anger issues and when there are people around, it generally doesn't take long before that anger comes out. And I can hardly stand it because I'm pretty stubborn myself. We can't be together in the same room for too long. I remember trying to explain that to my partner once, and I told him: "Being away doesn't mean I don't care." Sometimes I wish it were different but that's how it is. It's only a few emails once in a while but it's better than nothing. That's what I tried to express in my short: Relationships can be difficult but there might be a way. The robot is a metaphor of the screen that separates but also connects people sometimes.

The robot is wonderful. You can feel its emotions. How did the design and making of the robot come about?

I worked on the design of the robot with a great concept artist: Ronan Le Fur. He's a friend of a friend. We had time, as I didn't yet know yet when I was going to shoot. The brief was to make it cute, of course, but not too human either. It's still supposed to be a robot! Ronan quickly came up with different designs ideas and we worked from there for several weeks until we got this final design. After the shoot, a studio called Passion Pictures did the animation, rendering and compositing of the robot. I know them well as I have worked there as an animator myself. We worked together on the post-production for about three months.

Timothy Spall is excellent. How do you direct an actor when the other principal character is a robot?

Timothy truly is a wonderful actor. I was quite intimidated to work with him in a first place! He told me he had done that before (acting in front of a CGI character, for Disney) so I knew he perfectly understands the process! On set, we simply used a bamboo stick on a small base that was the same size that robot was meant to be. We stuck a piece of colored tape on it to indicate the robot's eye line so Timothy would know where to look. I always 'acted' the robot action before we shot any takes so Timothy would know what was supposed to happen, of course. That was a lots of fun!

Wait. Did he just swipe to change TV channels? A lot of scifi films try to dazzle with displays of new futuristic tech but you present it in an understated way as if its already part of people's existence. How do you resist the temptation to totally geek out?

Ahahah! I love that. Well, I guess I don't really have that temptation. If I just wanted to create cool sci-fi imagery, then I would do a VFX show reel. I already have one. I worked in that industry for more than ten years. I love geek stuff. I'm most certainly a geek myself in a way, but what I want, really, is to tell stories. And to tell this story in particular, I needed just enough futuristic elements to sell the idea of near future. So consequently, the presence of a little robot. And that's it. I wouldn't see the point of adding much more.

This a sci-fi film but it's primarily about relationships, something often said to be lacking in sci-fi films. What's the key to character development for you and which sci-fi films or authors do you find inspirational in this regard?

I have read somewhere a positive review on a sci-fi film that said: "Like any good sci-fi, it's about what it means to be human." It makes lots of sense to me and I realized it's what I love about any movie, sci-fi or not. I generally love those films that question and depict the human condition in all its complexity, ugliness, beauty, crave for love, hate, violence, dependency, loneliness...paradox.

In that regard, my favorite authors and movies are relatively eclectic and are not necessarily sci-fi.

I am not sure if I'm able to explain how I work for character development. I am mainly inspired by the people around me, I guess. Because those people and our relationship create emotions whatever those emotions might be. Sometimes it's difficult to handle. Making films might help a little.