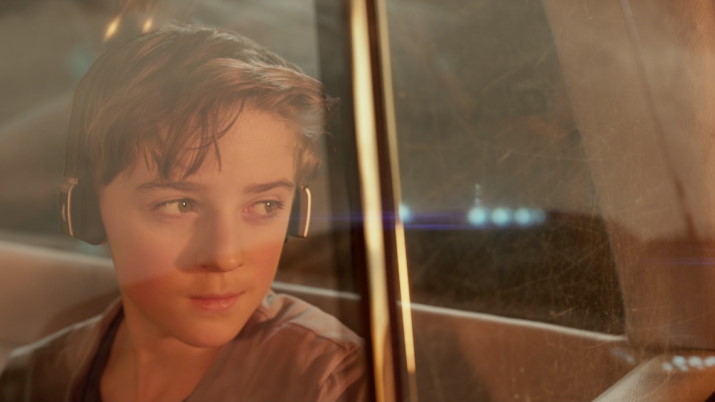 Synopsis: An overcrowded future. A terrible solution. A family stuck in traffic jam.

The Tunnel is based on a short story by Alice Glaser. What changes or modifications did you have to make in order to put the story on film?

There was a more optimistic view of the world in the short story. The surrounding world was not as bleak as in the film. I felt we had to change the environmental description, both weather-wise and when it comes to depicting poverty. I felt there needed to be a more extreme visual representation of why the tunnel even existed - something that just instantly gave the audience a feeling for why something like this could exist. In a short film like this, it doesn't need to be fully explained, just hinted at, as with everything in a short.

What was it about the short story that attracted your attention?

I was fascinated by the ordinary, relatable setting and characters, set up against such a horrific situation. A nuclear family in a car. A secret the parents are trying to keep from the kids. It could be that they are divorcing, but obviously it's potentially worse. Also I love the idea of the two "faces" the parents have. One of fear between themselves and another pretending to calm the kids.

I read the short story when I was a teenager, and it set off my imagination in a big way. Also it was told in such a matter of fact way, not fearing the tunnel, just talking about it as if it was an everyday thing. That contrast affected me deeply. Also, later, when I decided I wanted to make a film out of it, it built to such an intense climax, it just felt like a movie. It was just a perfect story about making small decisions with a huge impact. They are going to the beach, risking that? Also I loved the idea of how the main characters are just sitting there, doing nothing, and it's still an intense suspense story. As a director I look for challenges, and that was definitely one.

Tell us about the chess match and its importance as either a metaphor or as a foreshadowing device?

The chess match can mean a lot. But to me it's a sign that the world is still like our own. Chess is a timeless game. Also, even though this is impossible for the audience to catch, chess is a game that does not require space. Since there are no more football fields, the world has been forced to turn to games that are physically limited. Also, it's following the plot. It's a parallel plot line. And it's generally showing that the world just keeps going outside of their intense situation. Also chess being a game, it's a metaphor for them playing a game themselves - Russian roulette. Maybe games are big in this future. Everything is a consequence of something else, nothing exists in a vacuum.

If we are the pawns, who are the players?

We are both the pawns and players, like in reality. There are no evil corporations or dark, totalitarian governments in this story. It's society deciding what it needs to do to survive. And ideas of how to handle things are random. A few votes left or right it could have been very different. This is also a theme - how insignificant we sometimes are as individuals, compared to the needs of society. We're just little pieces in a big cog wheel. The idea that we are doing this to ourselves can be understood further from the politically motivated sign over the tunnel entrance. As we drive into the tunnel, we are reminded of why it exists, to help accept it. Also, going through it is not mandatory. It's like a toll road. You choose to do it. And the toll this time might be your own lives.

So society are the players. We agree to select politicians, and then we are bound to the decisions they make for us. Maybe they decide to go to war. Maybe they decide to build a wall. Maybe building a tunnel will solve a certain problem. Usually we generally agree with it, and to create a tunnel like this is just another political decision. It's nothing more than a consequence to a problem in society.

Why are there no consequences for the driver making the illegal lane change?

We don't really know if there are or not. In the heat of the moment, the focus is so much on the fate of our own family. It's not really part of the story.

Do you think random population control is a viable solution to overpopulation?

If you lived in this film, would you ever leave town knowing there is a high random risk of not returning?

I might. I fear flying, but fly dozens of times a year. 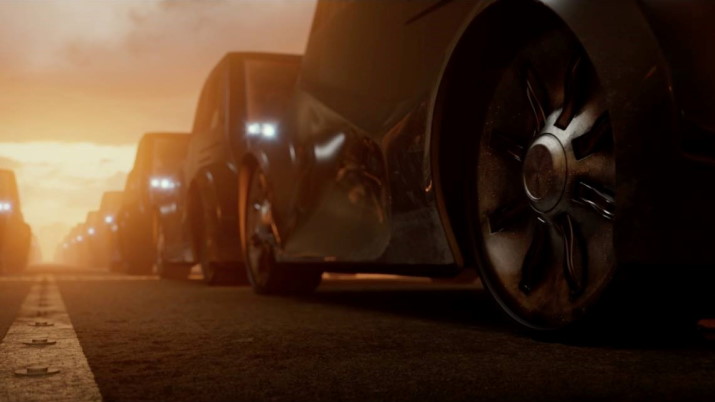 Technically, this film looks amazing. What was the biggest challenge in achieving the look of the film?

Thank you!! The look is threefold: First, the decision to make the exterior a warm and friendly sunset, which was easily achieved by my great cinematographer Nic Osborne and then matched in vfx lighting design and color grading. I also wanted the tunnel to be bright, clinical and white. So when they drive into it, it's not dark or scary. The brighter, the scarier. I wanted to turn the audience's expectations and feelings on their heads. It's one of the things I love the most about The Shining for example. It's bright and you can see everything all the time. Kubrick challenged all the clichés of how to create tension and I find that truly inspiring.

Then it's building the elements themselves, which takes a long time - both in design and in creating a cohesive, believable world that is both futuristic, but not too much so. The car design clearly being the most important one. We spent months working with industrial design students at the Norwegian Technical Science University in Trondheim. It had to be practical for shooting purposes (it's built in four separate pieces, like a cake, so we could pull out pieces to fit the camera in) and it had to look futuristic but still rooted in what we know today.

Then it's how you film it. Inside the car, I wanted a warm, friendly, intimate feeling, handheld and simple and energetic. It's about the family dynamics. Outside, I wanted it to be hard and cold, more systematic, machine-like, so the camera was locked off, often times in Kubrickian perspectives.

It's not really hard to shoot a film like this so that it's well prepped for post. But to create all the elements and to agree on the design elements was time consuming. And for editor Patrick Larsgaard, editing the film down to a scale where the vfx budget could handle it, was maybe the most complex thing. We had an amazing team of special effects people at Gimpville and Storyline Studios in Norway who worked day and night for months to finish it. Also producer John Einar Hagen's stamina to keep negotiating with every party and finding extra money during a long process was as essential to the existence and quality of the movie as my own contributions. It has been a labor of love for all of us.