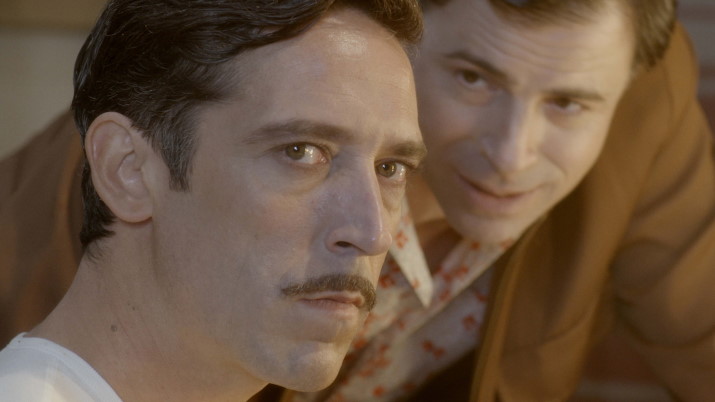 Synopsis: Hollywood, 1952. Henry Corso performs as a costumed gorilla on horror movies and adventure movies. For Jungle Jenna, he must terrorize the leading actress lost in a fake jungle. But scaring the woman he desires is going to be particularly tricky for the gorilla man.

How did the idea for Gorilla come about?

Well, as a kid or a teenager, I've always been fond of movies with apes: the original King Kong, The Planet of the Apes, Greystoke. But this is something I forgot for years. I'm also a big fan of "behind the scenes" movies, like Singing in the Rain or Barton Fink. Back In 2012, I discovered through www.hollywoodgorillamen.com the amazing careers of gorilla men like Bob Burns, Charles Gemora and Ray "Crash" Corrigan. That website created by Chris Casteel is a goldmine with tons of amazing photos. A story with a gorilla man as main character very soon came to my mind, because they were the guys nobody cared about, hard-working in really tough conditions and anonymous most of the time. Gorilla is not really an ape film, even though it's also a tribute to such movies. Plus, my main ambition was never to show how serials or jungle movies were made - even if I like the idea of giving the feeling of being on a set of that time period, between the 1930's and the very beginning of the 1950's. In fact, I keep exploring the same subjects since my first short film: loneliness, lack of communication between people, and desire. Having a guy trapped in heavy gorilla suit is perfect for that. But I'm convinced that it's possible to entertain with that, even if in some way this film is very personal. Gorilla is a comedy: how can you seduce a starlet when you look like a gorilla and you're treated like you are worthless? It's funny to me! 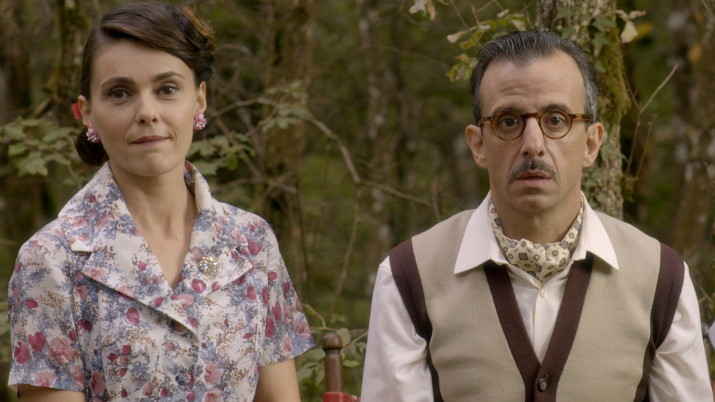 Huston's certainly right, but in the case of Gorilla the answer to your question is in the 5% left: the script. All the fabulous actors I casted agreed to participate in my film because they liked the story! It made me a happy screenwriter/director.

The lead character is played by Stéphane Coulon, a talented French actor that I already directed years ago on a previous short film shot in La Reunion Island. You may have seen him in international ad campaigns for Johnnie Walker or HSBC for example. Flore Bonaventura plays the starlet in Gorilla. She's a well-known French actress seen on TV series like The Source or in Cédric Klapisch's Chinese Puzzle. She's really a nice person, but she perfectly plays a bitchy starlet in my film. And she has the classical beauty I was looking for and a lot of sensuality.

I also had to have English-speaking actors in Gorilla, because I didn't want the film to be phony with French actors speaking English as if they had no French accent. The two main characters don't say a word so I could cast two French actors, Flore and Stéphane. For the speaking parts, I had to find American or English actors. Luckily, some really talented ones live and work in France! David Coburn, Nathan Rippy and James Gerard are some of them. David had a long career in the US (on TV series, movies, in Broadway or as voice actor) before he moved to France. I was really honored to have him, because he and Nathan really bring that "American touch" that I needed to create the illusion of being in Hollywood. In Gorilla, the English-Australian actor James Gerard is a perfect Johnny Weismuller kind of actor from the Jungle Jim area. James brought a lot of humor too. I wish to work soon again with all of them. They're so good! 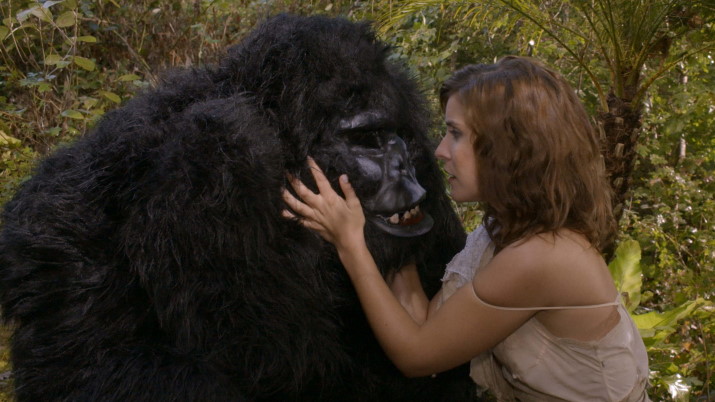 What films/actors did you reference when casting and creating the look/style of this film?

I had the luck to work with high-skilled professionals like the DoP Philippe Brelot and the Academy-award-nominated production designer Anne Seibel. Together, they created what I needed. Tarzan's or King Kong's jungles were big references to me. You have to know magic tricks to build such a set with almost no money!

I asked Flore Bonaventura to watch King Kong and The Most Dangerous Game, both with Fay Wray, because Flore plays the same kind of scream queen in Gorilla. And Fay was the first and the best. Marie Berroyer, the costume designer, copied the torn dress that Ann Darrow wore on Skull Island.

The gorilla suit was also a challenge, because such an old looking gorilla outfit simply doesn't exist in Europe! You can rent expensive realistic suits with animatronics, but that's not what I needed. So I asked two puppeteers, Cyril Fournier and Nadia Perherin from Cie Doigts Pirates, to make one for the film. They did a pretty good job in only two weeks, working day and night. The ape suit was finished on the eve of the first day of shooting! Stephane Coulon (the gorilla man) had never worn it before I first said "action" on the set but you wouldn't notice. 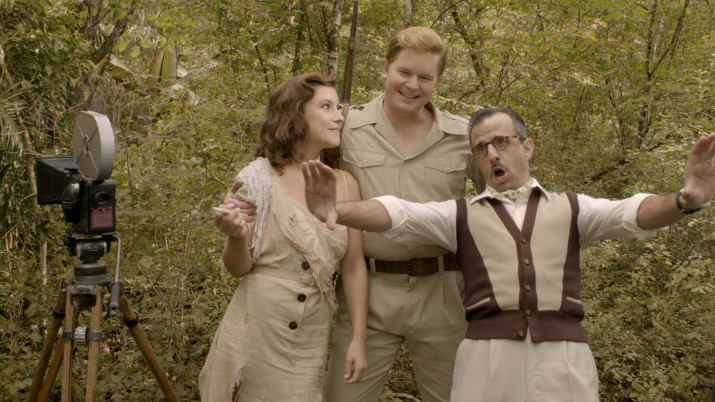 Where was the film shot? How did you come across the set?

The story takes place in Hollywood, but it was 100% filmed in Burgundy, France, in only three rainy days. Gorilla is a very small budget short film, so we didn't have the money to shoot in the USA. We received some funds from the Burgundy regional council. This is why we had to shoot there. So you can imagine how hard it can be to create a Hollywood studio and a fake jungle supposedly in California, when what you have in Burgundy are vineyards, cows and bucolic landscapes. But we did it! Thanks to the Burgundy film commission and thanks to Anne Seibel our production designer. And also thanks to the matte painter artist Stéphane Keller and VFX supervisor Julien Roger. Gorilla is not my first narrative short, but this time I really had the feeling of making a film, because most of the artistic process was to make the illusion work perfectly right. 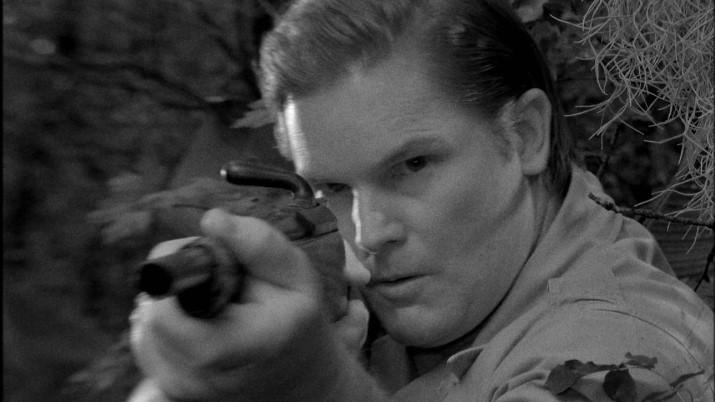 You have a doc in the works about Iggy and the Stooges, which was first shot in 2002, a great period to capture them. Can you tell us a little about that and when can the world hope to see it?

I first met Iggy Pop in 2001 to tell him about the project and to ask him if he would agree to participate in my film. The following year, I filmed the Asheton brothers for the first time. And in 2003, The Stooges reunited and toured for years. I have worked since that time on the documentary. It's named The Stooges Guide to Eternity and it's about an hour long. The film has been delayed several times for many reasons, but I hope the fans will finally be able to see it in 2017. All I can tell you is that it's focused on the original Stooges.