Synopsis: A divorced mother is obsessed with the idea that her ex-husband is plotting to take her baby away from her.

This film is an old school horror film in that in doesn't rely on blood and gore to scare the audience. Please explain your approach to the horror genre and what for you makes for a scary movie.

The true essence of horror doesn't require big special effects or constant jump scares. I believe that, beyond blood and violence, horror lives in a shadow behind the window, in a disturbing noise behind a door, or in a telephone ringing in the middle of the night. It's that same horror that takes us to great authors like Poe, Henry James or Le Fanu. It's about playing with hints, mind tricks, and fine lines against the roughness of other subgenres related to horror. I've always loved horror movies and I've always dreamed of telling these types of stories. The horror in Behind is subtle, like a whisper. I wanted it to be similar to classics like Rosemary's Baby, The Innocents, Repulsion or The Haunting. It's a type of horror that doesn't end once the movie is over. Instead, it stays with you. It follows you everywhere and plays tricks on you when you are home alone. 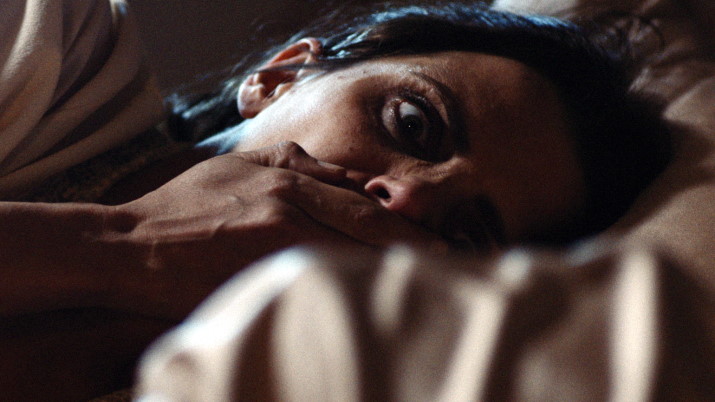 Your lead actress Macarena Gómez is critically important since if the audience doesn't believe her terror, then the film doesn't work. Tell us about her and the qualities she has as an actress that made you decide to cast her in this film.

Finding the suitable actress or actor for the designated role is of one of the most difficult and important tasks a movie director faces when creating a cinematographic work. Macarena Gómez is an excellent Spanish actress with a big career in the film industry, especially in the horror genre, having worked with the most important directors of our country. I am very lucky that I had the chance to work with her before in other short films and got to perfectly know her amazing acting potential. When I wrote Behind, I always had Macarena in mind so I was able to explore the deepest psychological aspects of the character that would perfectly match with Macarena's acting. Behind is a horror movie built on the deep emotional tragedy of the main character and through her, we get to live a terrible story full of fears. In this kind of story, being able to get the audience to perfectly connect with the emotional state of the main character is crucial as is making the main character's feelings the audience's feelings. After all, a character in any kind of movie is an emotional vehicle through whom the viewers get to live an adventure, a story or an amazing trip, all told form the emotional point of view of a character. I think that Macarena Gómez was the perfect choice to embody the character of Arianne.

There is an old black & white horror film on the TV. What film is this and is it a source of inspiration?

The film that is on TV during one of the scenes is The Cabinet of Dr. Caligari by Robert Wiene. It is one of the most outstanding movies of German Expressionism and one of the most important movies in the history of film in that it contributed to the beginning of what we now know as horror films. This movie, in particular, is a great source of inspiration and that is the reason why it appears in Behind as a tribute. The Cabinet of Dr. Caligari is a movie that tells everything from a very specific point of view, according to the subjectivity of one of the characters. The facts are shown as the only existing reality but later we discover everything was told from an altered subjective view. Here we can find the first connection between the film and the universe of Behind. Moreover, the moment in which the movie appears in Behind has not been randomly chosen. It is an intentional decision in order to metaphorically increase the concept that connects both films.

The supernatural and technology, especially cameras, seem to have an interesting relationship in this film. What are your thoughts about that?

Yes, of course. Technology is everywhere and it makes perfect sense to think that because of it, we are able to witness and experience certain paranormal elements that the human eye is not able to perceive. It is all about updating and modernizing the classic horror stories and taking advantage of the enormous power that new technologies bring us. Moreover, we can expose how much we depend on technology by creating a powerful metaphorical reflection on the solitude of modern existence and how we keep getting even closer to human isolation. I have always felt very attracted to horror movies that rely on technology in order to create or to develop their universe. Asian horror movies have provided groundbreaking titles that have explored this territory. One Missed Call, The Ring, Shutter or Pulse are great examples. These films dealt with ghosts, curses and other paranormal elements that coexist with us in our world while at the same time exposing people's loneliness in the modern world and how technology creates social isolation.

What was the first film you ever saw that scared you? And what was so scary about it?

Throughout my life, I have watched hundreds of horror movies since it was always been my favorite genre. When I was young, I watched all the movies of the German Expressionism, Universal's horror movies, Hammer's horror movies, and, of course, many movies from all around the world. But if I had to say what the first movie that scared me, I would undoubtedly say The Ring, the Japanese movie by Hideo Nakata. It was an amazing discovery when I saw it at the age of 11, the year it was released. I found a movie told with a language, a style, a production and a universe completely new for me. From that moment on, that kind of movie became a reference in my preferences as a viewer and in my education as filmmaker.

What's the best scary movie of all time? And why?

That's a very hard question to answer because I could mention more than a hundred movies. But I will focus on my favorite horror movie in recent times: It Follows, by David Robert Mitchell. It Follows was like a breath of fresh air for modern horror cinema. There are so many positive things that I can say about this film. For example, its slow burn factor: the horror progresses relentlessly but also at a deliberately slow pace and without great effects. It's truly a masterpiece of intelligent horror loaded with a deep and metaphorical meaning based on a very original story truly worthy of the most disturbing nightmares. It's got an unusual visual style and an exquisite taste for finding beauty in the most frightening elements. It's a perfect example of balance between beauty and horror. It's flawlessly directed. And on top of that, it is a wonderful tribute to the best horror movies of the 70s and 80s -- both decades being so important to horror movie lovers. For these reasons, and for many others, It Follows is my favorite modern horror movie.